​FIVE ICONIC DIVE AND SNORKELLING SITES ON THE NSW COASTLINE

Tweet
To bring you a little happiness in these uncertain times, why not start dreaming about your next underwater adventure in New South Wales?
By: Vim & Vigour PR

With an abundance of underwater activities to enjoy, NSW is home to some of the best snorkelling and world-renowned dive sites in Australia.

This includes Cook Island at Tweed Heads, home to a monumental amount of turtles and clownfish, and Julian Rocks at Byron Bay, where you can find many turtles, enormous rays and manta rays, and friendly leopard sharks are particularly special.

In Sydney, Shelly Beach is home to octopus, eagle rays and the giant cuttlefish – the only place in the world to see these animals is in southern parts of Australia. Kurnell has one of the largest populations of weedy sea dragons in the world (which are also only found in southern Australia). Montague Island is one of the best places to see seals in Australia, as well as whales, dolphins and NSW’s largest population of little penguins.

Below are five iconic spots to dive or snorkel in NSW and what you’ll see there. Unmissable for underwater enthusiasts! 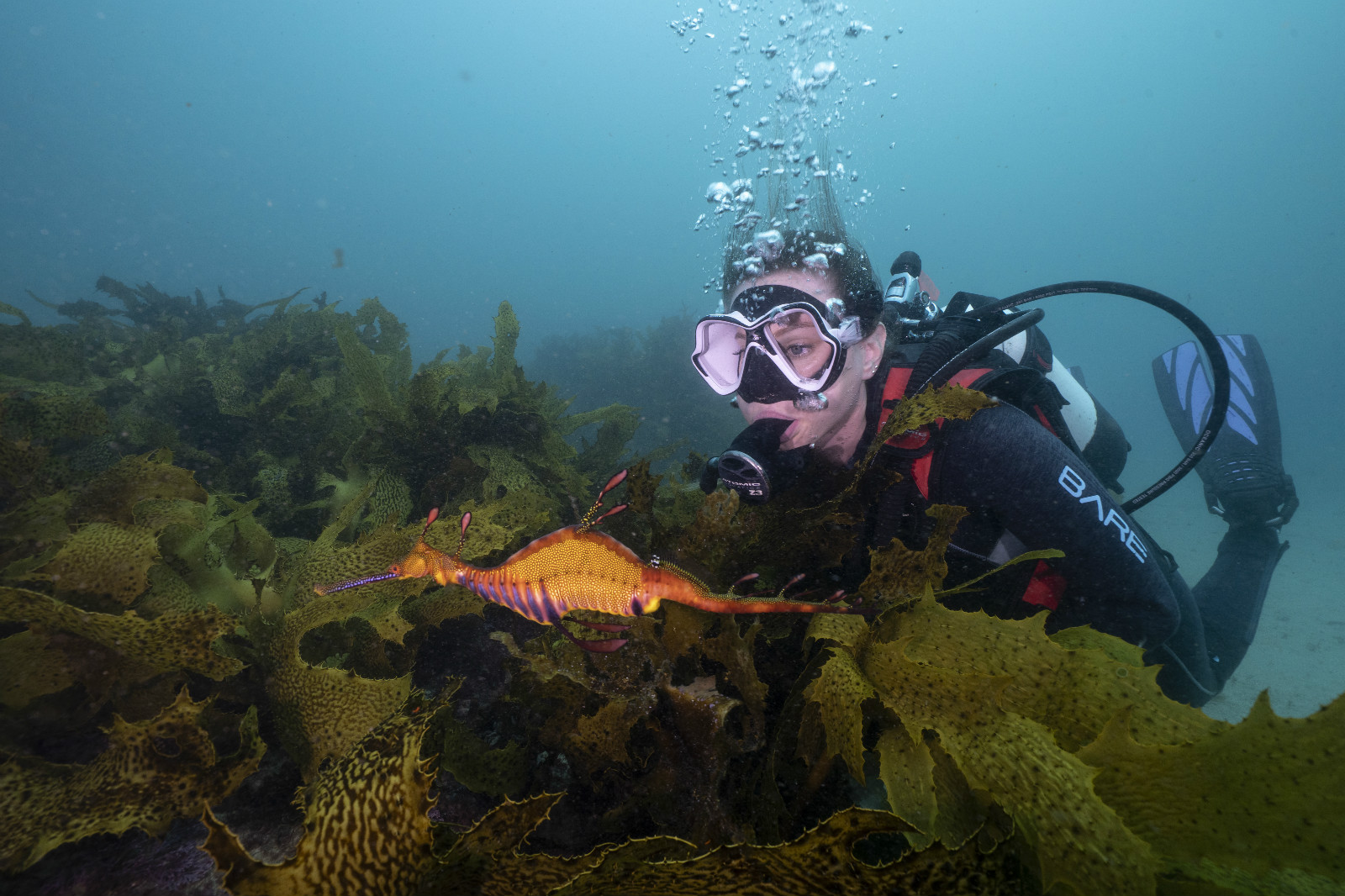 Kurnell is at the southern headland of Kamay Botany Bay National Park, near Cronulla in Sydney’s Sutherland Shire. It has an incredible underwater experience as it boasts giant cuttlefish (which can change colours to disguise themselves), dense coral gardens and the largest population of Weedy Sea Dragons in the world; one of the rarest maritime creatures in the ocean. It is also home to Captain Cook’s landing place at Botany Bay National Park.

Marine life: Kurnell has a very large coral garden that lines all its dive sites. It’s home to potbelly seahorses, octopus, cuttlefish and schooling kingfish. It also has NSW’s largest weedy sea dragon population, which are only found in southern parts of Australia, and is one of the only places to see weedy sea dragons with an orange tint.

Conditions: Visibility is best just before high tide (20 mins before) and can get up to 15-20 metres at its best (usually in winter). It averages around 8-10m on high tide and if there is little swell. This is a site best in calm conditions. It has a sandy bottom and a depth of around 12m. The entire site is lined by a kelp bed.

Water temp: Water temp is similar to Sydney – roughly 16 degrees in winter to 21 in summer (5mm wetsuit is sufficient, hoods are not necessary even in winter). 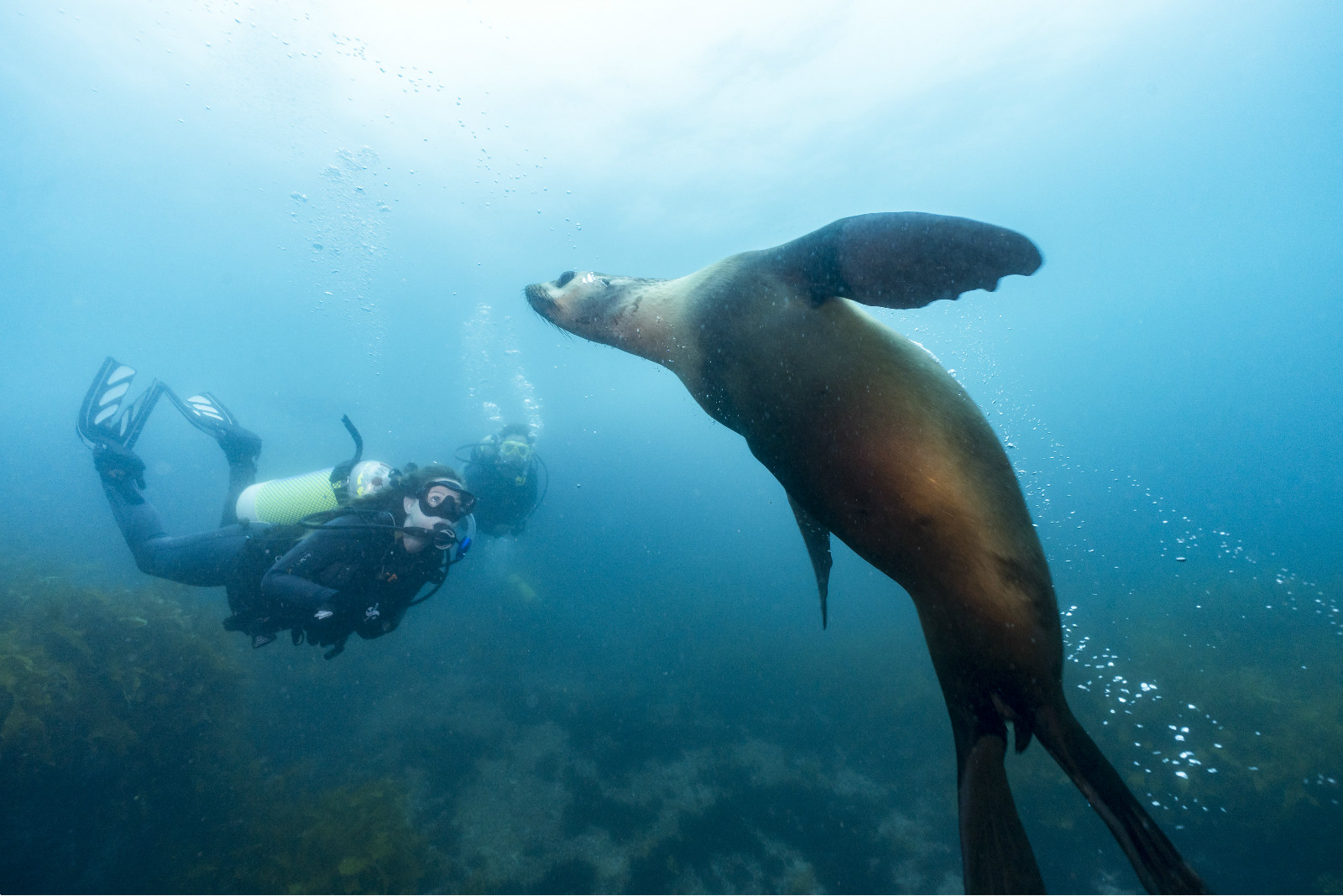 Montague Island on NSW’s South Coast is a destination that is renowned for its natural beauty and large colony of seals and penguins. Here you can snorkel in its reef, visit the seal colony and view the penguins in late afternoon as they come back to shore to feed their babies.

Marine life: The seal colony consists of around 1,000 seals all year round. Australian Fur Seals and New Zealand Fur Seals live on the island in separate areas and on different rocks. They usually don’t interact with each other. There is a large population of little penguins; Montague Island is home to around 10,000 pairs of them. There are also a number of large resident bull rays and Port Jackson sharks that hang out underwater amongst the seals.

Conditions: Visibility is regularly 15-30m. In good conditions divers can expect an average of 20m. It has a sandy bottom, with a depth around 15m, but the seals hang out between 1-5m deep so it’s normally a shallow dive/snorkel.

Accessibility: This is a boat dive and requires a tour operator. 20 min boat ride to Montague Island.

Water temp: Water temperatures are around 15 degrees in winter to 20 in summer (all operators offer suitable wetsuits as part of their trip). 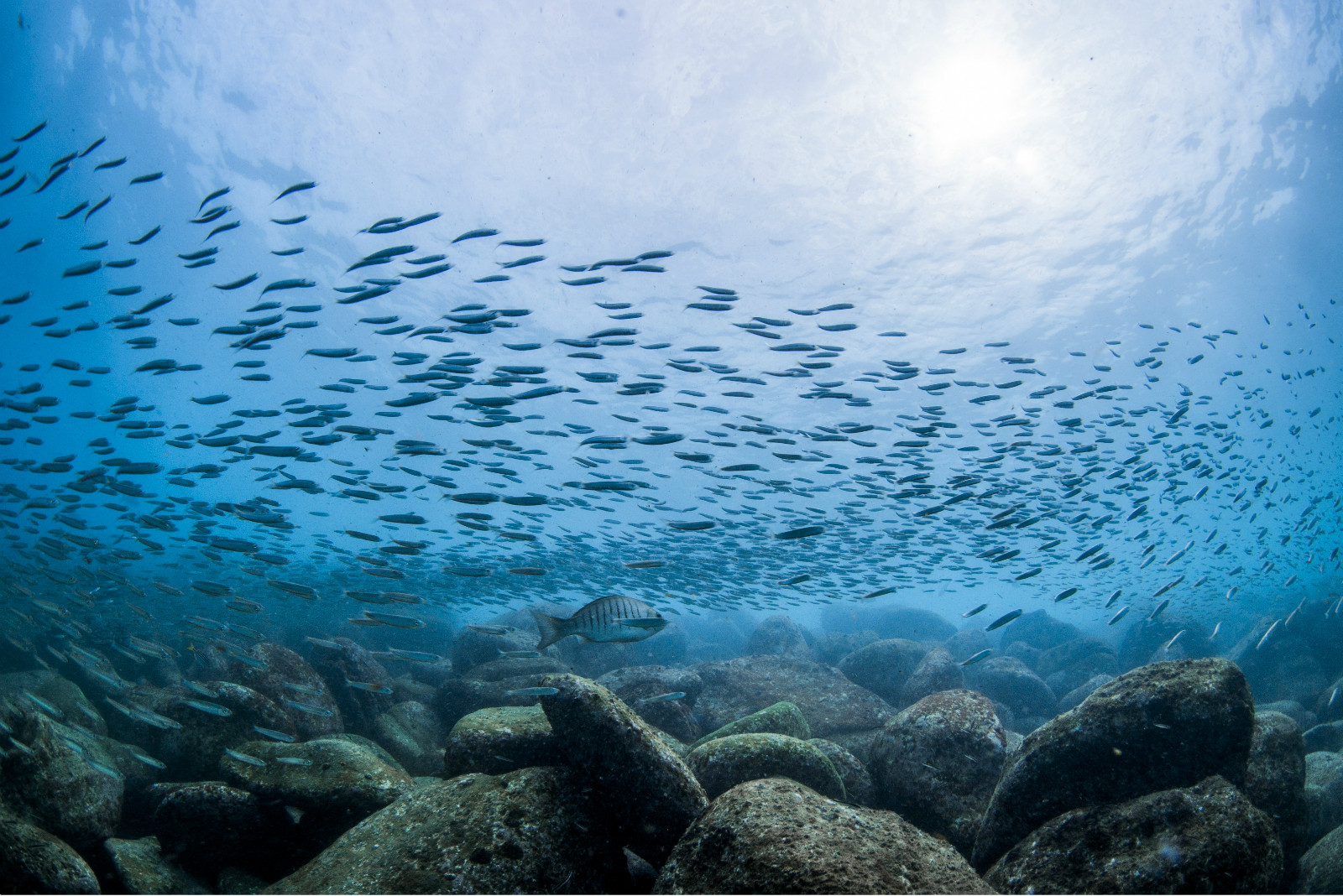 Located in the popular suburb of Manly, the calmer waters of Shelly Beach are home to the best snorkelling in Sydney where you can view schools of fish, octopus, eagle rays and giant cuttlefish. A short walk from Manly Beach and a ferry trip from the city, it is the perfect location to have an underwater adventure close to the city.

Marine life: Giant cuttlefish are always found here. In winter months (June-August), they breed and you will spot up to 10 giant cuttlefish swimming around looking for a mate in a single dive/snorkel. Around August-September, Shelly Beach is also a shelter for baby dusky whaler sharks that use the bay as a safe area to develop and grow. These sharks range between 30cm to 1m by the time they are fully grown, at which point they leave for the open ocean. Octopus are regularly found here along with Eagle Rays and Port Jackson Sharks. It’s also one of the most popular hangouts for Wobbygong sharks. There is also a range of fish life and schooling fish that live in the bay.

Conditions: Visibility is regularly 8-10m. In good conditions divers can expect an average of 10-13m. It has a sandy bottom and a depth of around 9-10m on the Point side, and the Ferry Bower side has a depth of around 3-5m (better for snorkelling.)

Accessibility: This is a beach entry from Shelly Beach. The site has a Motorbike Wreck on the Point Side just as you enter that often has rays and Port Jackson sharks around it.

Water temp: Water temp is roughly 16 degrees in winter to 22 in summer. 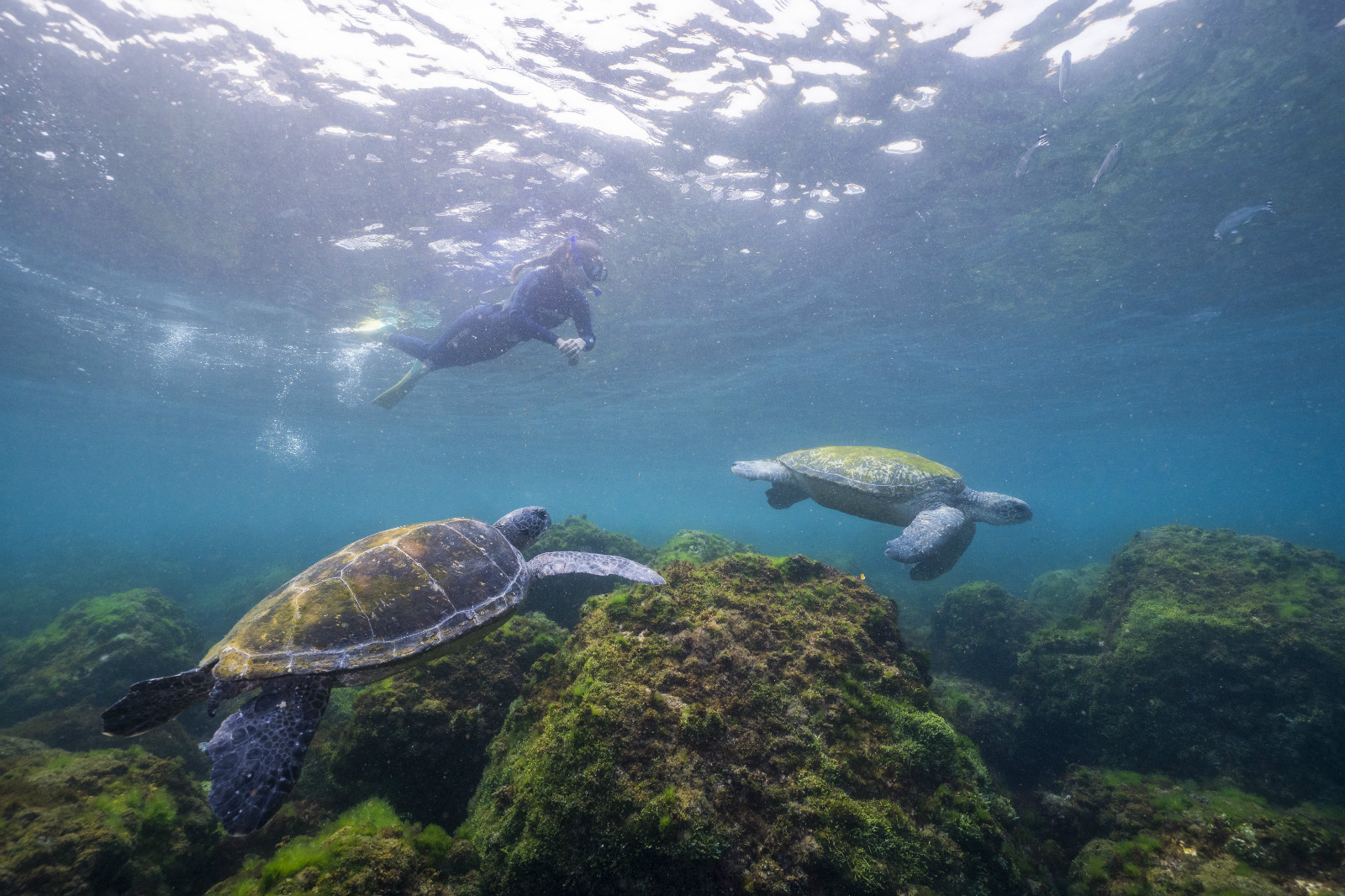 Cook Island offers the incredible experience of getting up close with turtles. The area also has amazing ocean views and a reef that has many different species of fish and marine life.

Marine life: The island is home to an enormous number of turtles. It’s possible to see between 15-30 different turtles while snorkelling. There are also a range of anemone fish and other tropical fish species, corals and some larger bull and marble rays. Cook Island has three turtle species; green sea turtles, hawksbill turtles and loggerhead turtles.

Conditions: Visibility is regularly 15-20m. In good conditions divers can expect an average of 15m. Snorkellers will likely see a maximum depth of 4m as they spend their entire session over a very large coral ledge where the turtles hang out (200m long approx.) There is a drop off that extends around this ledge which has a maximum depth of around 15-20m.

Accessbility: This is an aquatic reserve and is only accessible by boat.

Water temp: The water here is quite warm – 18 degrees in winter to 26 degrees in summer. 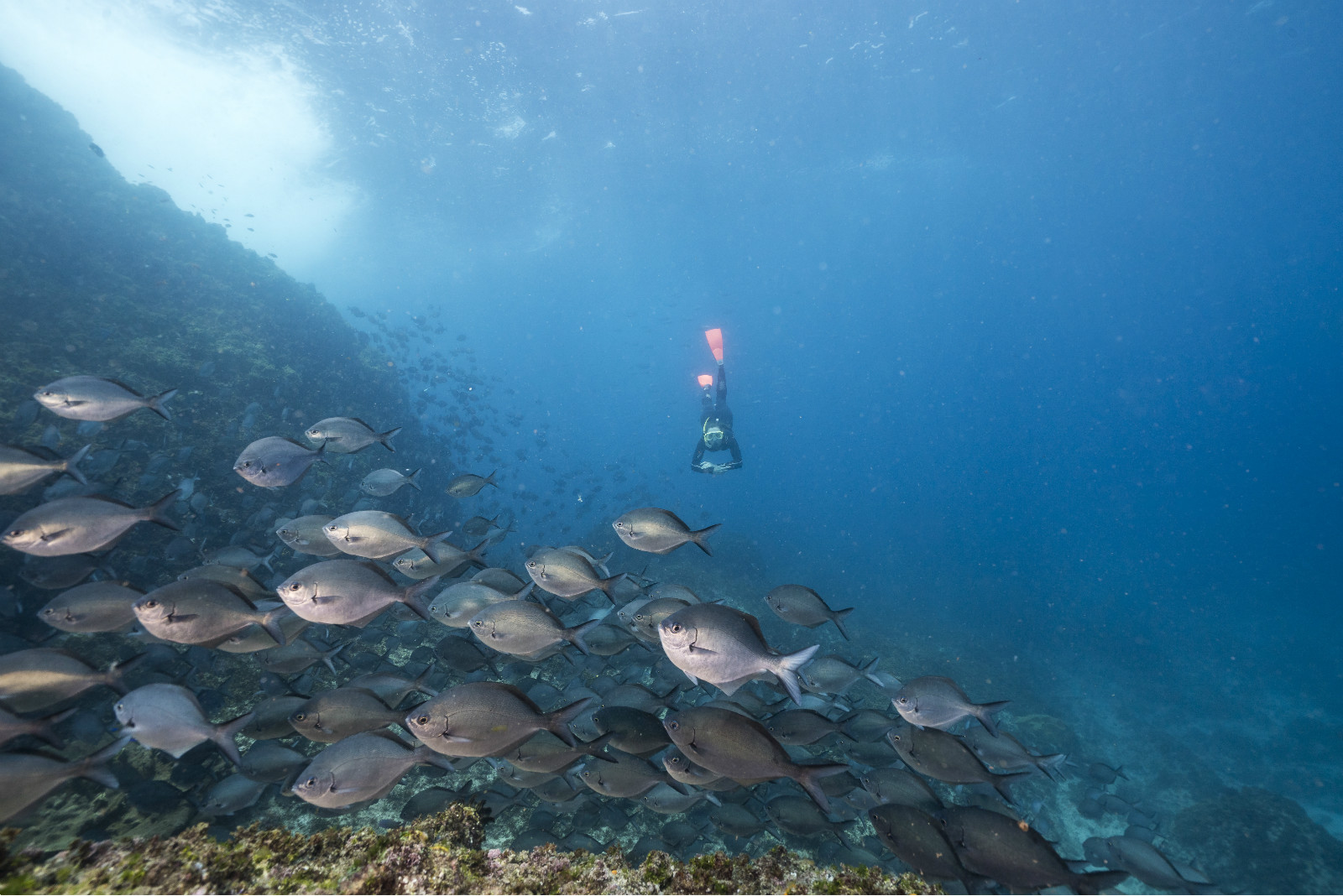 Julian Rocks is one of the best diving spots in Australia and rivals the Great Barrier Reef with its underwater experiences. The diving experience includes viewing turtles, manta rays and a vast array of fish. The area is also home to dolphins and humpback whales.

Marine life: Similar to Tweed Heads, there are lots of turtles, green sea turtles, hawksbill turtles and loggerhead turtles that live and frequent Julian Rocks. There are also a significant number of anemone fish and other tropical fish species, as well as a large population of wobbegong sharks. Spotted eagle rays, bull and marble rays, blue spotted rays and manta rays are often seen here as well.

Conditions: Visibility is regularly 15-20m. In good conditions divers can expect an average of 15m. Snorkellers will likely see a maximum depth of 8m. The scuba divers will get to around 15m at the deepest. This is a sandy/hard coral bottom. Scuba divers have the opportunity of diving around the far side of the island to the trenches which offer a safe, swim-through/cave like sensation, and there is also a small cave. These trenches/caves are often home to an array of larger fish.

Accessibility: This is an aquatic reserve and is only accessible by boat. On the five minute boat ride to Julian Rocks, it’s not uncommon to spot dolphins along the way.

Water temp: The water here is quite warm – 18 degrees in winter to 26 degrees in summer.

For more inspiration, check out www.visitnsw.com/love-nsw.