Tweet
Many of us may be stuck at home right now, but that doesn’t stop us from dreaming of our next luxurious getaway. Here are 12 incredible hotels across Asia that we can’t wait to visit once the world gets back to normal.
By: Balcony Media Group 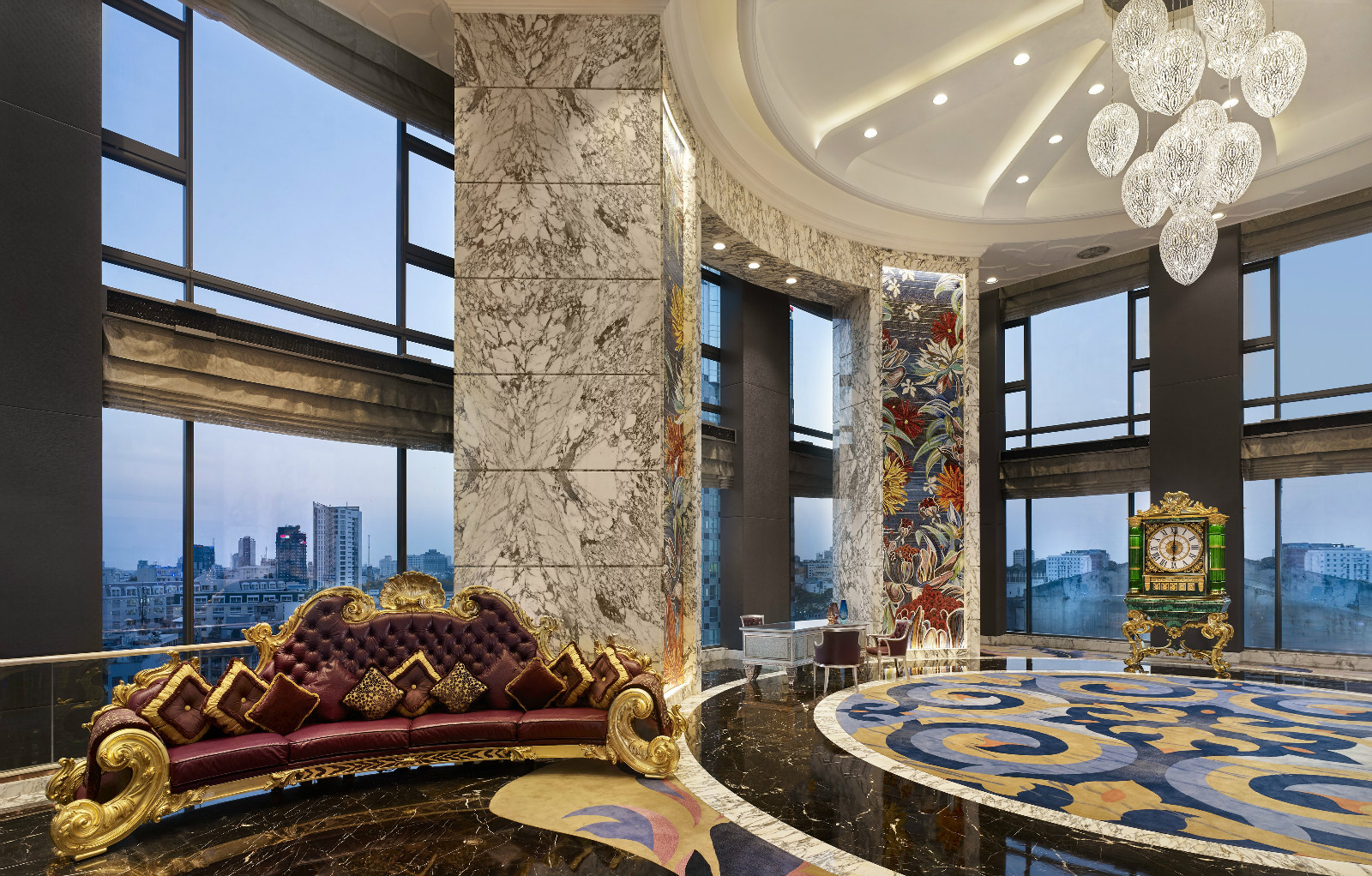 Located in downtown Ho Chi Minh, The Reverie Saigon is a jaw-dropping blend of decadent Italian design and genuine Vietnamese hospitality. Inside Vietnam’s most lavish hotel, a member of the Leading Hotels of the World, Italian Carrara marble covers the floors and walls, a custom-made 24-carat gold Baldi clock, and a 5-meter-long Colombostile sofa in purple ostrich leather adorn the lobby. Meanwhile, top Italian brands (such as Poltrana Frau and Giorgetti) furnish the 286 rooms and suites — all of which have stunning views of the Saigon River and the city skyline. The property features five restaurants and bars, including The Royal Pavilion (Cantonese fine-dining) and R&J (which serves authentic Italian fare and is named after Romeo and Juliet), plus a two-storey spa and fitness centre, and a rooftop pool. In addition, guests have a fleet of more than a dozen luxury cars at their disposal as well as exclusive access to the hotel’s 60-foot Monte Carlo yacht. 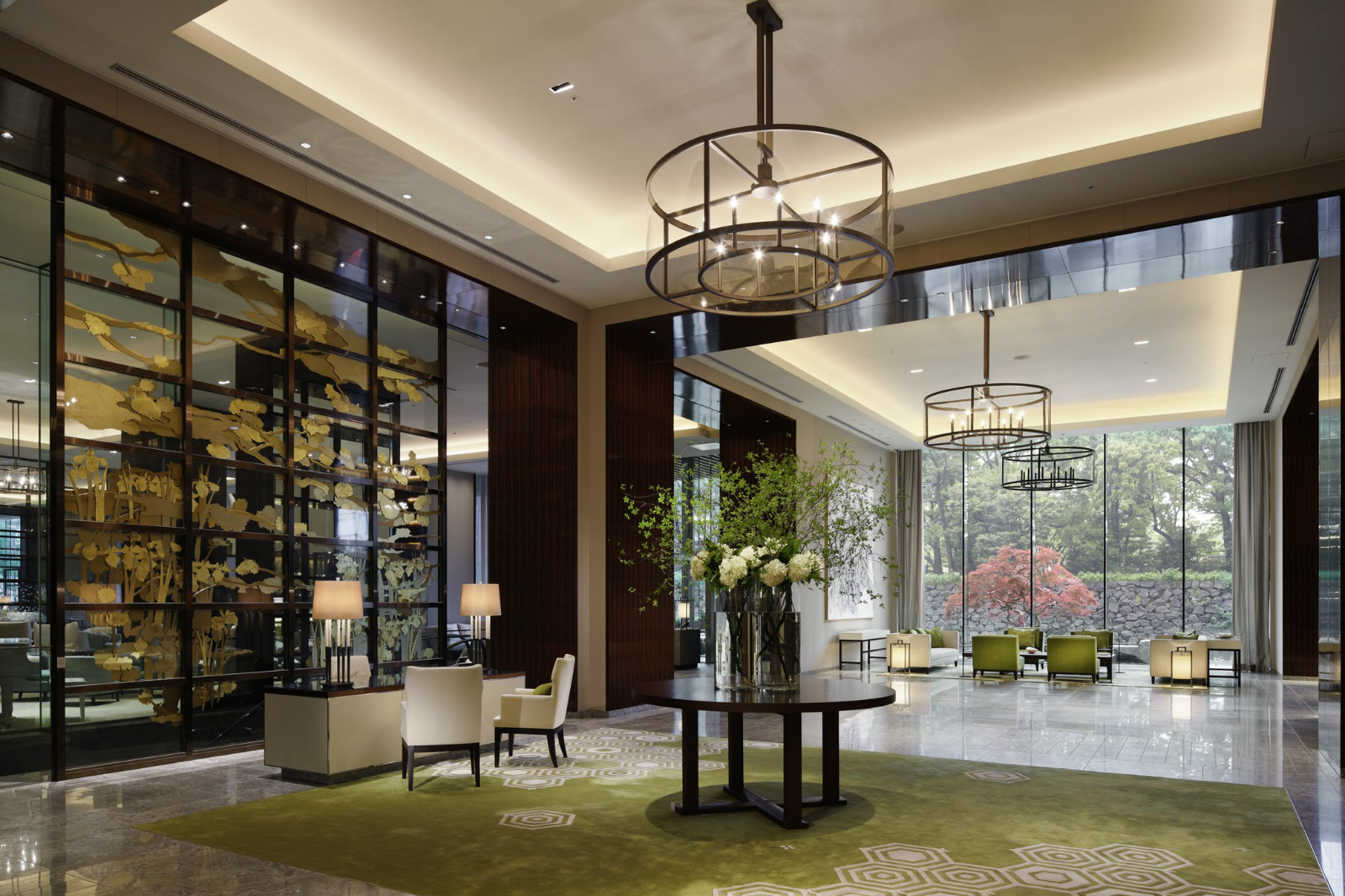 Set in the heart of Tokyo’s business district in Marunouchi, right next door to the Imperial Palace gardens, Palace Hotel Tokyo’s location is hard to beat. Heir to a hotel that was built in the 1960s, the historic hotel re-opened in 2012 after a USD 1.2 billion rebuild from the ground-up. Today, the modern granite-and-glass property features 10 restaurants and bars including a new French restaurant in partnership with Alain Ducasse (Esterre), exquisite Japanese (Wadakura), and an Old World-style cigar and martini bar (Royal Bar) in addition to the country’s very first evian SPA. All 290 contemporary guestrooms and suites come with traditional Japanese touches such as Jugetsudo teas by Maruyama Nori, plush Imabari bath linens and Nambu-tekki cast iron teapots, reflecting the true meaning of omotenashi (Japanese hospitality). More than half of the rooms have open-air balconies offering sweeping views of the Imperial Palace gardens and the Tokyo skyline — a real luxury in the city. 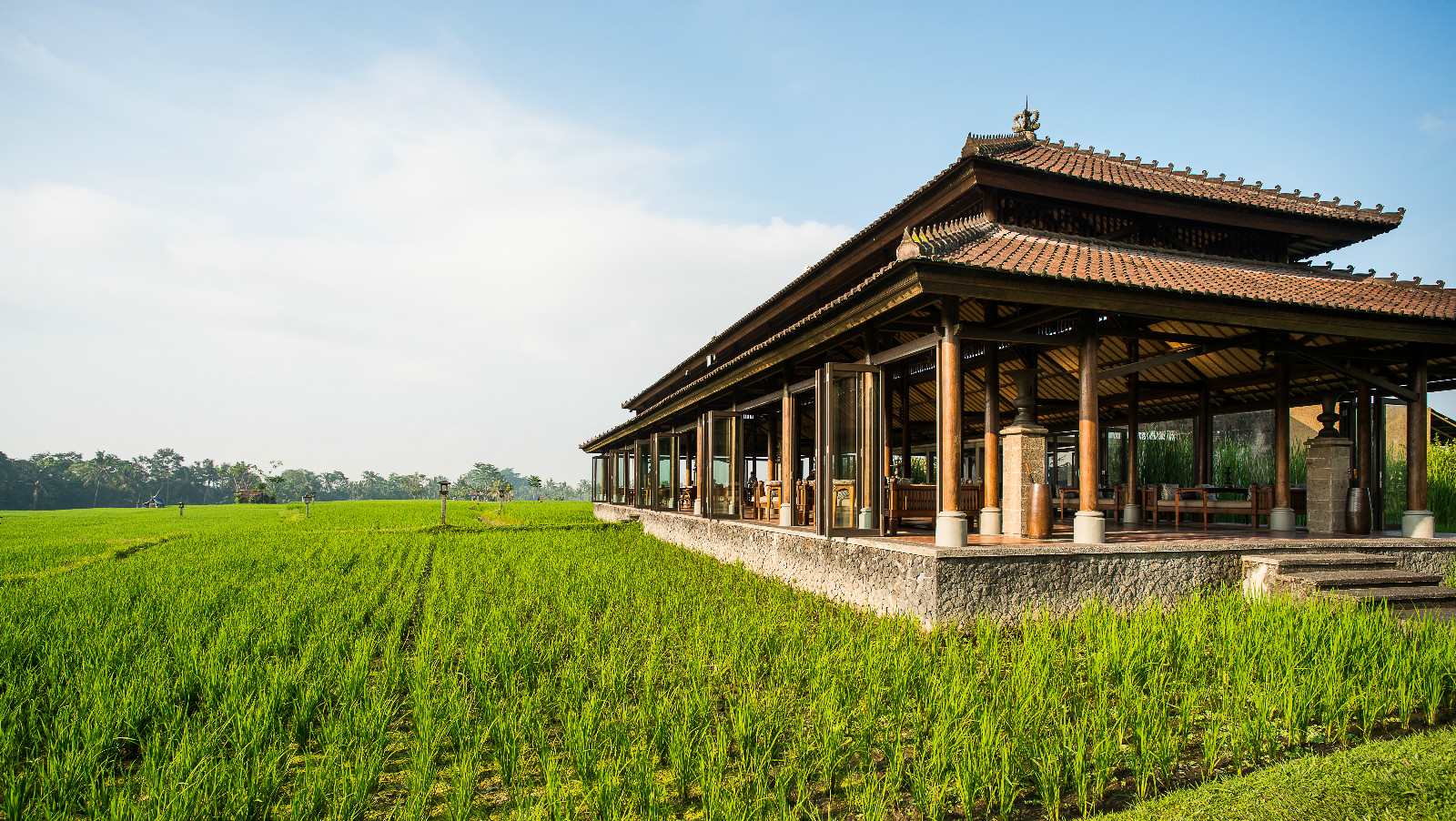 Moored among the rice paddies of Bali’s spiritual heart at Ubud, the idyllic 20-key property was once the private family estate of noted Indonesian architect Hendra Hadiprana. Built in the ‘80s as a holiday home for the legendary designer and transformed into a resort in 2004 when the architect’s imagination conjured the possibility of another estate nearby, this Leading Hotel of the World came back into the Hadiprana family’s fold in January this year. The resort’s extensive art and antique collection, collected over decades, remains a pillar of the property and strolling the grounds is an immersion in Balinese art and sculpture. The secluded five-hectare estate also features two dining destinations, both with uninterrupted views of some of Ubud’s most iconic scenery, an indulgent spa that also makes the most of the view, and a spacious swimming pool with mythic gajah (elephant) statues standing guard over the water. Rooms are in traditional Balinese style with semi-outdoor bathrooms and several with private plunge pools. 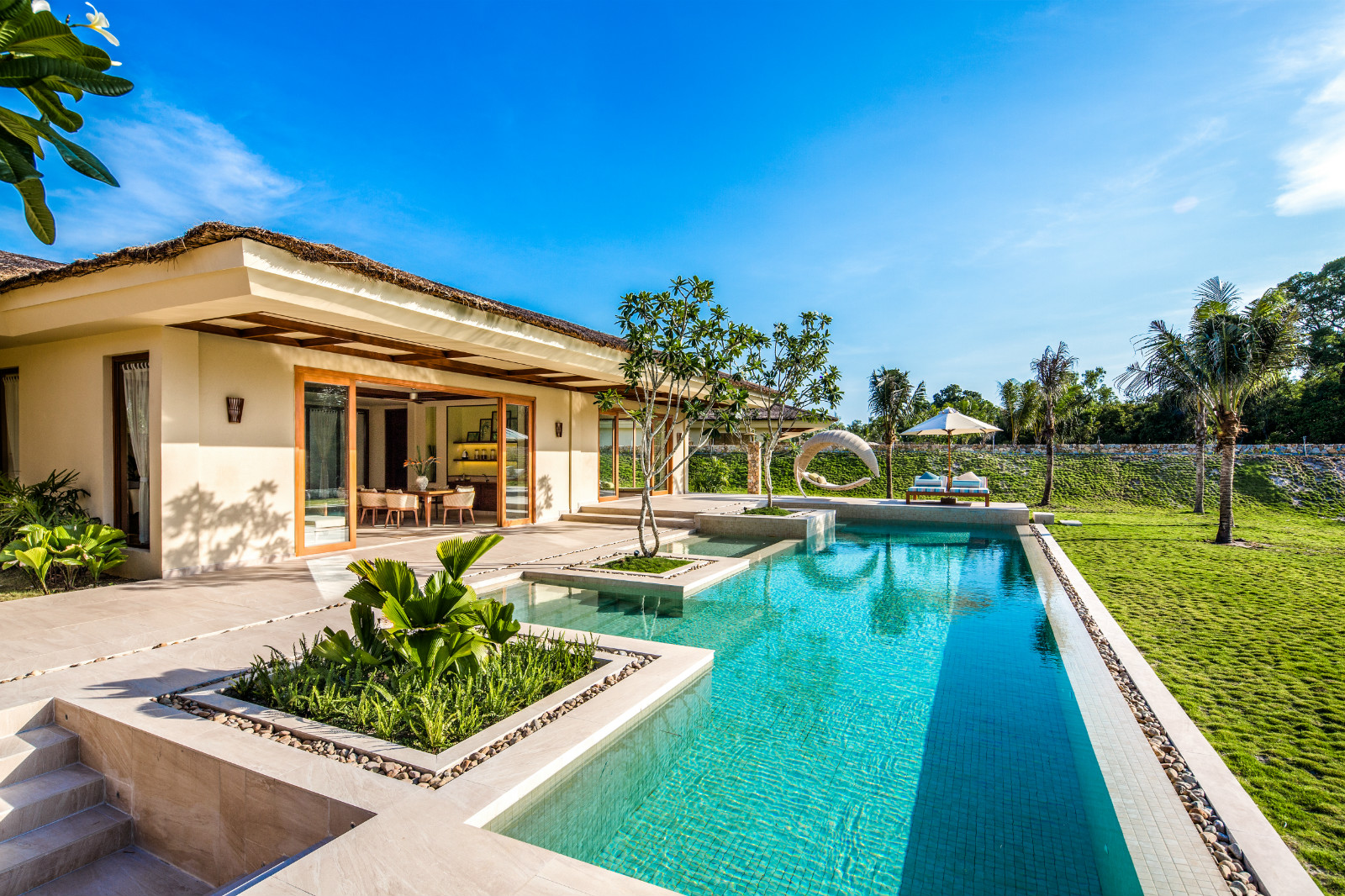 The only spa inclusive resort on Vietnam’s largest island holds a picturesque plot of land bordering the kind of white sand beach the island has become famous for. Each of the 130 private villas has a contemporary design inspired by local fishing villages and a private plunge pool in a secluded garden. The property also boasts the largest spa and wellness facility on Phu Quoc - at 11,210 square-metres (121,000 square-feet) - and the tranquil spot includes 26 treatment rooms surrounding a verdant pepper grove, steam and sauna facilities, an adults-only pool, health club, and indoor and outdoor yoga spaces. Two restaurants as well as a breakfast anytime, anywhere concept round out the main dining options. The Beach Bar on the sand offers the best seat in the house come sunset when a live band entertains guests as the day turns to night. 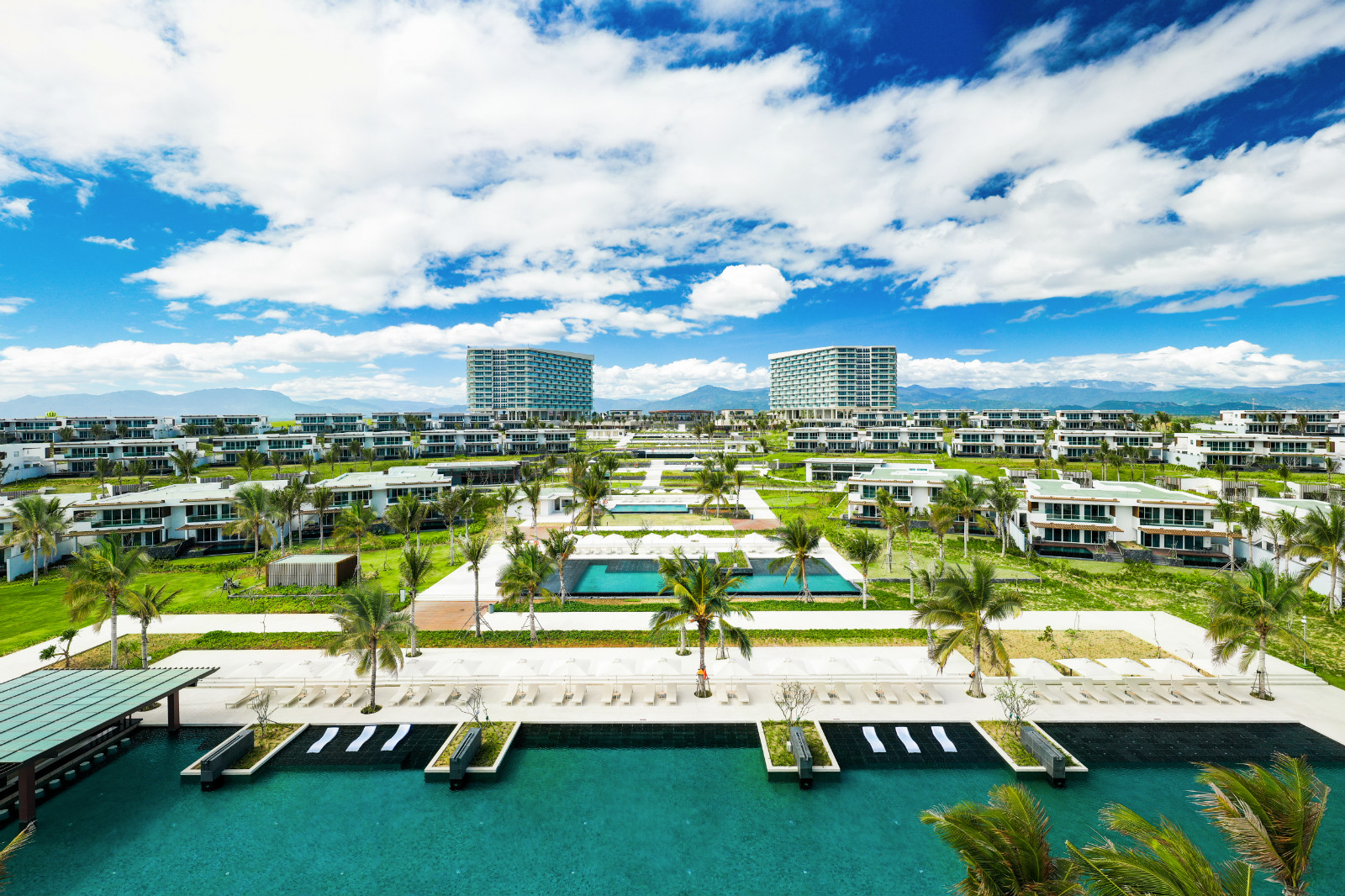 Situated on the Cam Ranh peninsula fronting Long Beach, Alma resort commands some 30 hectares of inspiring ground. Emblematic of Vietnam's maturation as a destination, the bold and spacious resort offers 580 oversized suites and pavilions that all afford sweeping vistas of the ocean, including contemporary three-bedroom oceanfront pavilions each totalling 224 sqm with a living room, kitchen, four bathrooms and a private pool. Alma features a broad spectrum of restaurants helmed by top chefs, a food court with an array of local and international cuisine, as well as a classical bar, pool bar and beach bar. Other highlights include 12 swimming pools cascading down to the beach, a water park, 13-treatment room spa, 70-seat cinema, convention centre, amphitheater, art gallery, science museum, gymnasium and yoga room, 18-hole mini golf course, a youth centre with virtual reality games, a kid’s club, watersports centre and even an 'Alma Mart' mini supermarket. 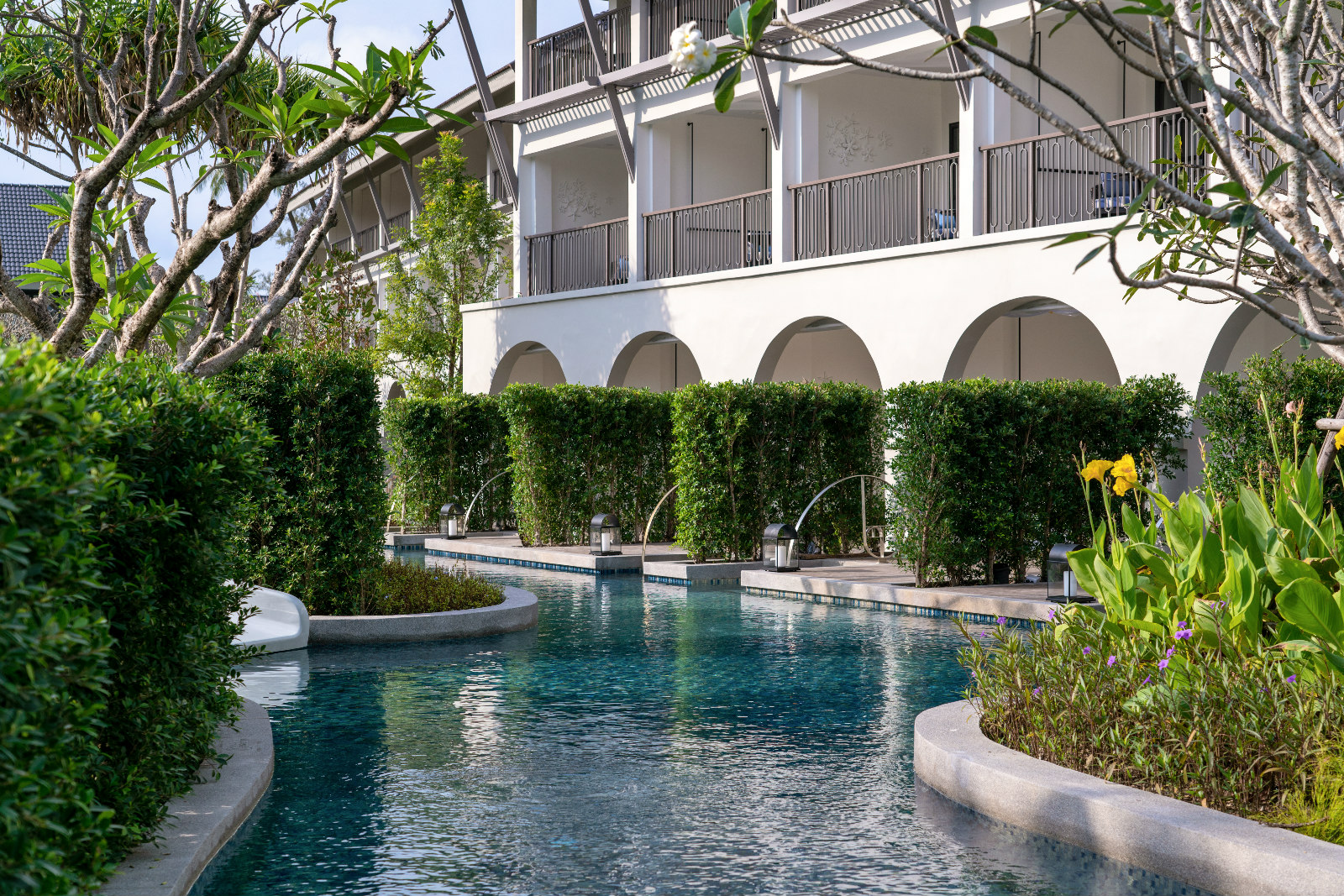 At Choeng Mon Beach on the north-eastern tip of Thailand's Koh Samui island, the new Meliá Koh Samui deploys a compelling nautical theme. Paying homage to Koh Samui’s heritage as a safe haven for sailors and sea traders, the 159-room and 41-suite resort has given teak wood merchant vessels, that are more than 100 years old, a new lease on life, converting them into elegant two-story boat suites sized 91 to 100 sqm. Each boat suite offers either sea views, garden views or direct access to a remarkable 1600 sqm lagoon pool that loops through its grounds like a river. The first property in Thailand launched under Spanish hotel group Meliá Hotels International, the resort, that celebrated its grand opening on January 10 this year, is also home to two restaurants, an executive lounge shaped like a ship's hull, a two-level infinity pool with sunken seating areas, a swim-up bar, spa, fitness center, ballroom and, for families, a kid’s club, outdoor playground and mini water park. 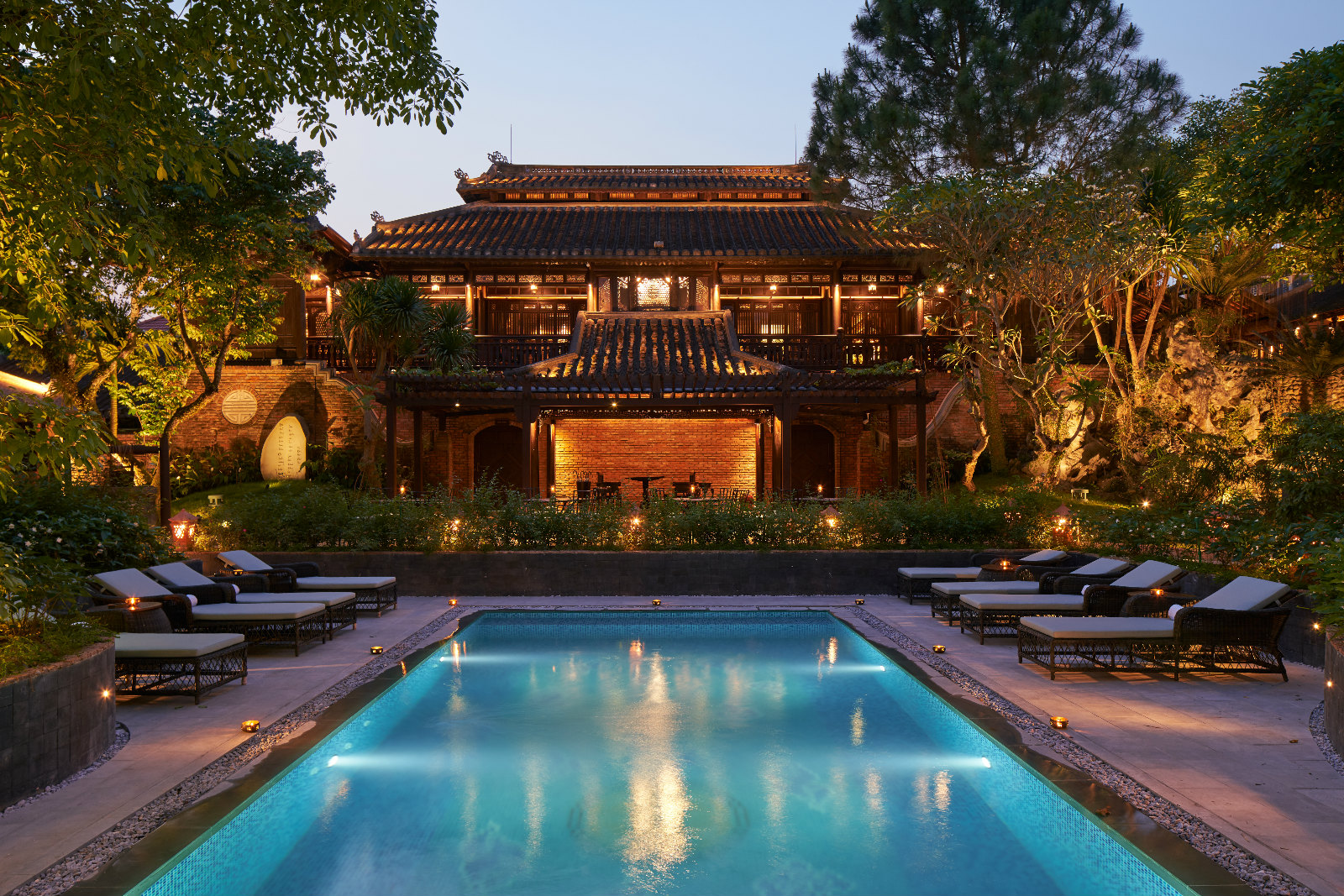 When people refer to a room being “fit for a king”, they are usually talking figuratively. Not so in the case of Ancient Hue, a luxury boutique complex of authentic nha ruong (garden homes) recently unveiled in Hue, Vietnam’s former royal capital. The five ancient royal houses at the resort were originally used as dwellings for members of the extended imperial families. Beautifully restored by skilled Vietnamese artisans, the garden homes feature an exquisite fusion of traditional charm and contemporary luxury. Ancient Hue is owned and was conceived by Trails of Indochina, one of Southeast Asia’s leading boutique tour operators. Indeed, the property is a passion project for Trails of Indochina founder John Tue Nguyen, who is originally from Hue. “Ancient Hue is a way for me to leave some kind of legacy,” he says. “Hue is like nowhere else in Vietnam. The original charm is intact. With Ancient Hue we are trying to ensure that the city’s heritage and character is preserved.” 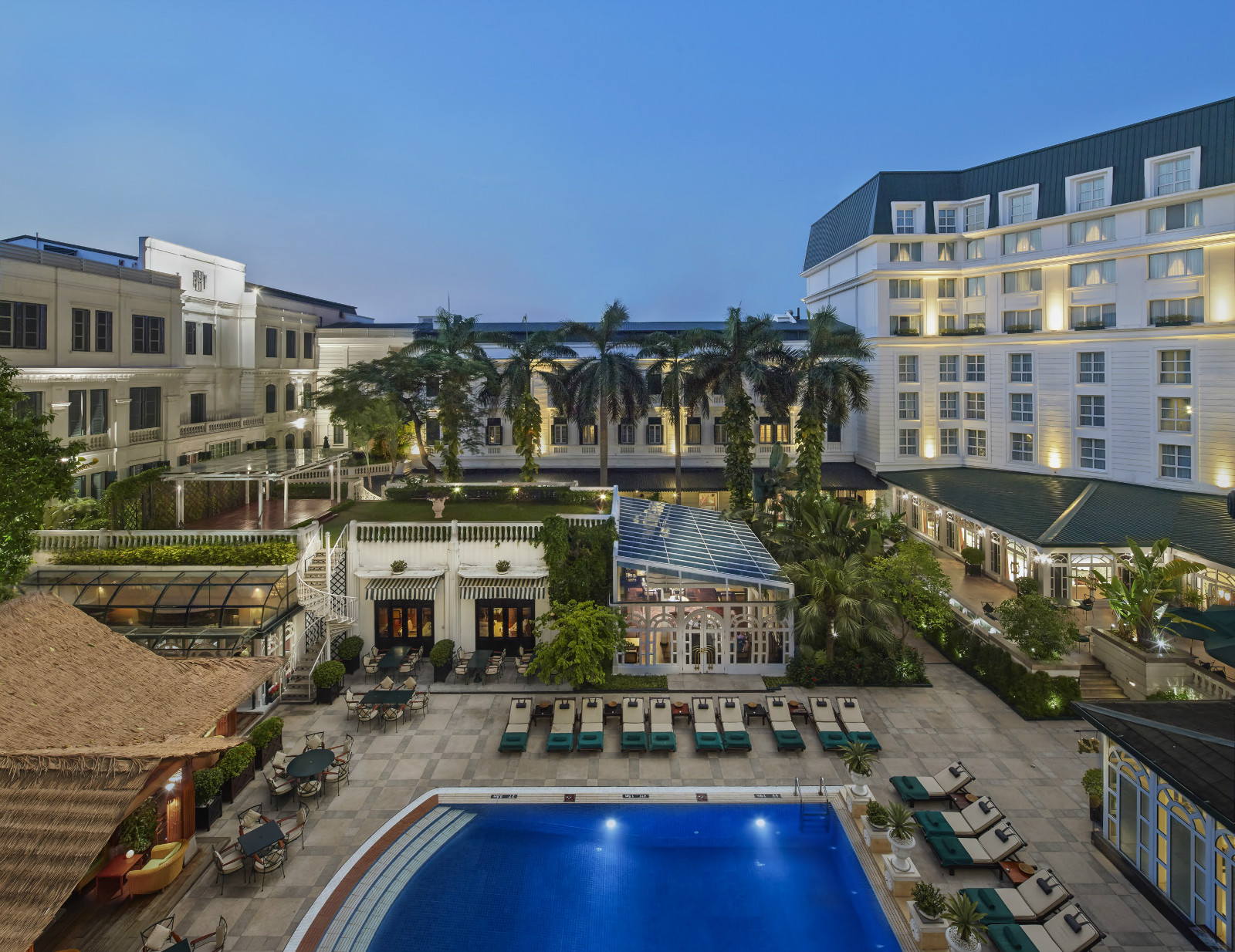 With its stately grandeur and 120 years of history, the Sofitel Legend Metropole Hanoi is one of Southeast Asia’s most iconic hotels. Famous guests over the decades have ranged from Charlie Chaplin and Graham Greene to Angelina Jolie and innumerable heads of state. The hotel’s popular “Path of History” tour includes a look back at this illustrious past, as well as a visit to the underground bomb shelter that protected Joan Baez, Jane Fonda and others from air raids during the US-Vietnam War. In February, the Metropole Hanoi was awarded a Five-Star Rating, the highest level of recognition, from Forbes Travel Guide. The hotel is home to several celebrated restaurants, including Le Beaulieu (French fine dining), Spices Garden (Vietnamese), and angelina (international), as well as venues like Le Club Bar (for afternoon tea), La Terrasse (a Parisian-style cafe) and Bamboo Bar (for bespoke cocktails.) 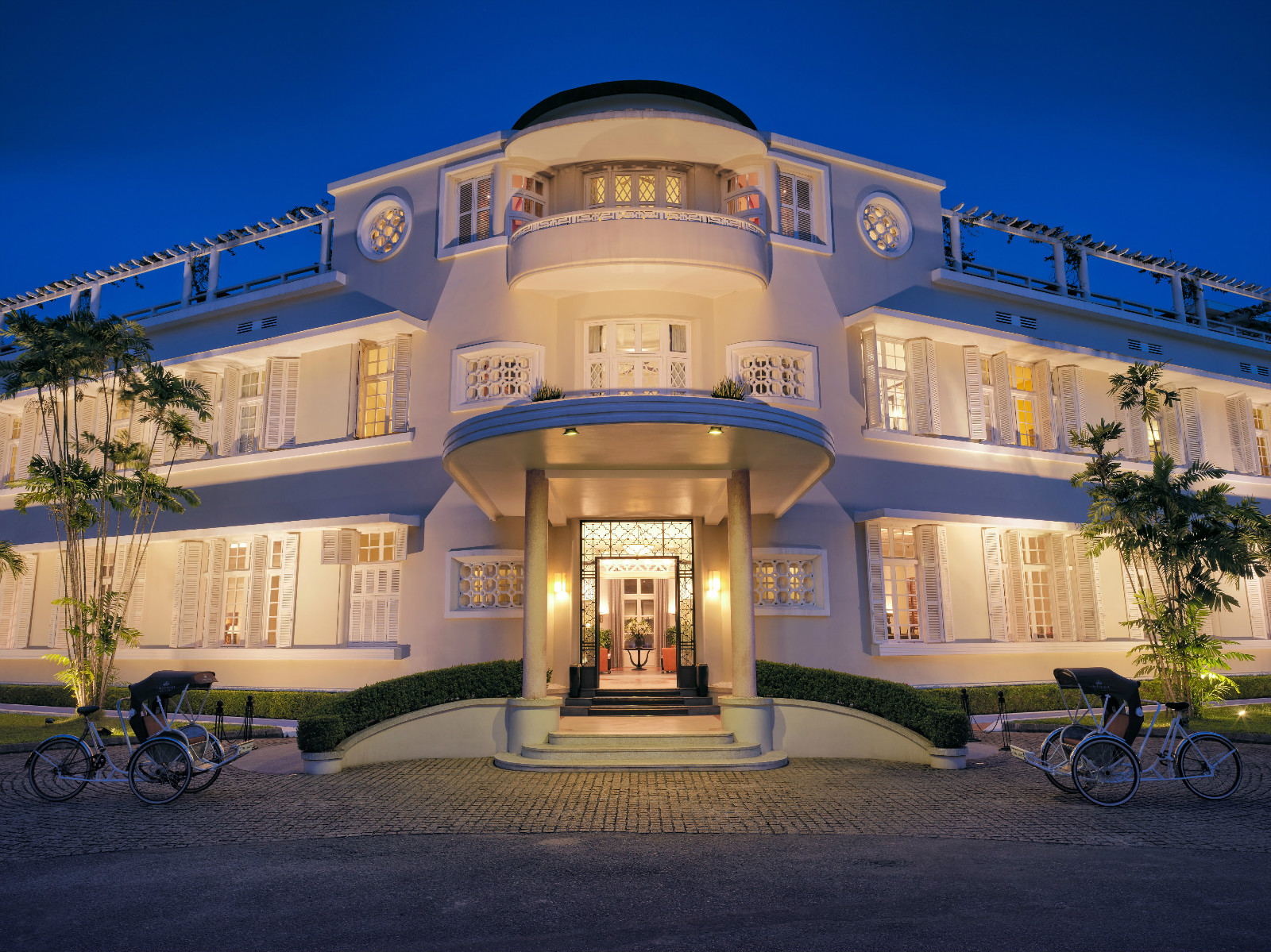 Set on the banks of the fabled Perfume River in central Vietnam, the 122-room Azerai La Residence, Hue offers postcard views of the centuries-old Hue citadel and iconic flagpole. The colonial mansion at the heart of the hotel dates back to 1930 and was part of the French Resident Superieure’s official residence. The distinctive façade features long horizontal lines and nautical flourishes, both hallmarks of the streamline moderne school of art deco architecture. In recent months, the hotel unveiled a vastly expanded and refurbished spa, and new treatment menu, along with 39 newly renovated guest rooms in the east wing. In January, the hotel introduced a new luxury river boat providing up to three daily excursions. The property became part of legendary hotelier Adrian Zecha’s Azerai brand in December 2018, and last year Azerai La Residence, Hue was named one of Time magazine’s “World’s 100 Greatest Places.” 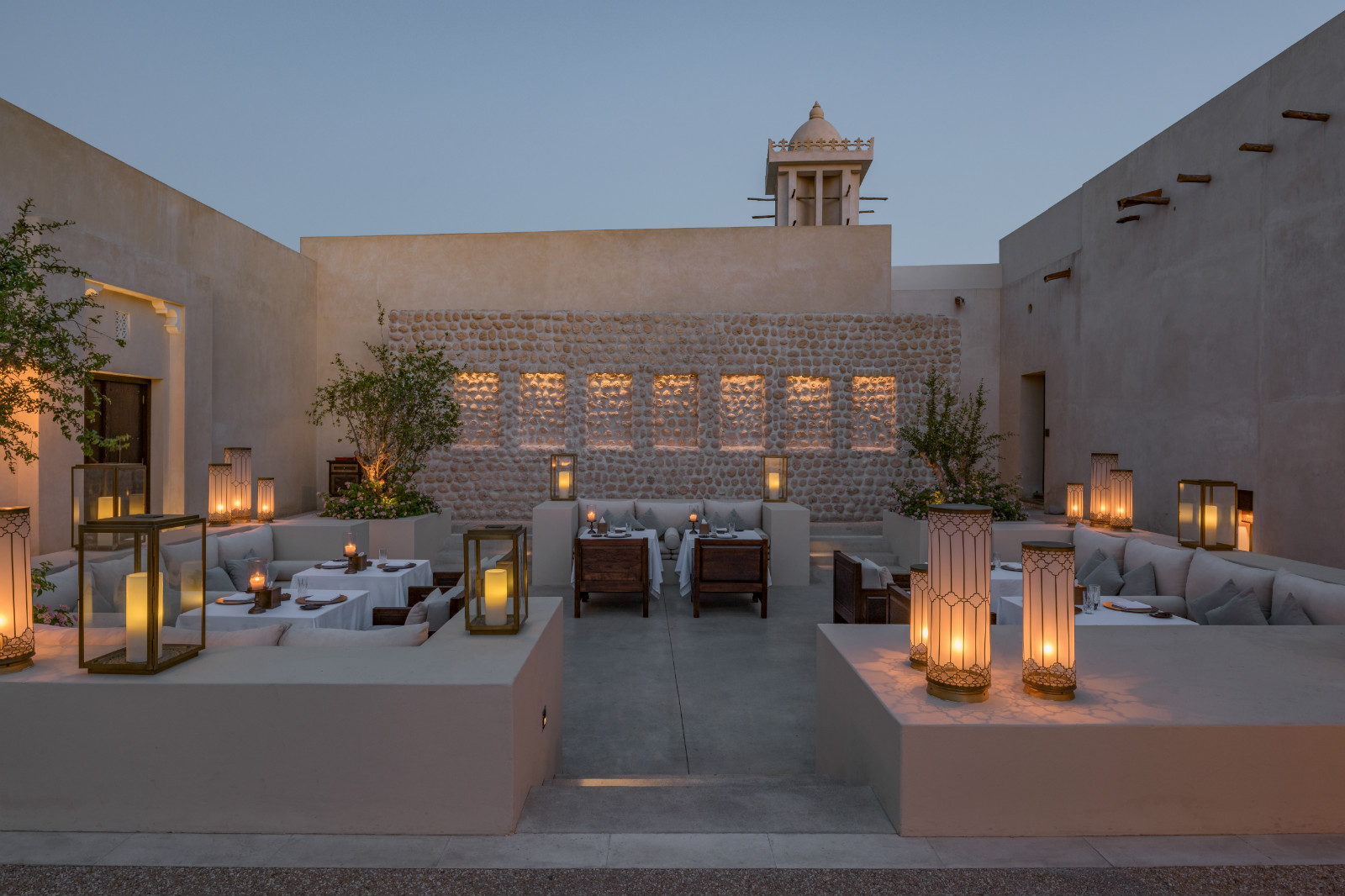 Eight years in the making, the 53-room resort by GHM debuted in marked contrast to the world-famous hotel towers of nearby Dubai, cultivating a low-slung profile and an aesthetic that celebrates indigenous building design and materials. Its historic barjeel, or wind tower, punctuates the district’s age-old appeal. A museum worthy of stand-alone status signals the ambitions of the hotel -- and the city -- to showcase the emirate’s particular heritage. The name of this Leading Hotel of the World -- Al Bait -- means home in Arabic and is reference both to the intimate atmospherics of the property’s design, and to the five historic residential chambers at the heart of the new property. The homes are each named for former inhabitants, and resound with their original purpose as residences that did double duty as a post office, a customs’ house and a salon or majlis, for the city’s intellectual elite. Its coral building blocks and gypsum have stood the test of time. In 2020, Travel + Leisure trumpeted the hotel on its IT List as one of the most remarkable new hotels in the world.

Golf courses all over Asia are often anchored by a great hotel. Few clubs can boast of having not just one, but two of the region’s highest rated resorts within a well-struck iron shot of the clubhouse. At Laguna Lang Co, one of Vietnam’s finest golf tests -- Laguna Golf Lang Co -- is anchored by the multi-award winning pair Angsana Lang Co and Banyan Tree Lang Co, both ranked among the top 20 resorts in Asia, as recognised by Conde Nast Traveller’s Readers’ Choice Awards in 2019. Angsana Lang Co, which commands extended beach frontage and features 229 stylish suites, more than 100 of which come with their own private pools overlooking the East Sea, was ranked at #2 on the list. Banyan Tree Lang Co, a multi-award-winning all-pool villa resort, meanwhile, was rated #13 in Asia by readers of the publication, regarded by many as the world’s leading authority on luxury travel.

Nestled against a lush 38-acre hillside, and overlooking a secluded cove of beach, coral reefs and sapphire waters, this majestic resort is a haven of luxury and tranquility. The 88 villas, each with a private infinity pool and 24-hour butler service, are tiered into the tropical landscape to provide guests with maximum sea views and sunshine. Relax at the award-winning spa which has its own rainforest-themed hydrotherapy facility. Or take a speedboat trip with your friends and family to do a spot of island-hopping. It’s close to here that many of the scenes in the Leonardo Di Caprio move The Beach were filmed, and oh what a paradise it truly is.