Tweet
Airbnb joins the Olympic Partners (TOP) program and will support the sustainability objectives of the Olympic Movement.
By: Airbnb

The International Olympic Committee (IOC) and Airbnb today announced a significant agreement to support the Olympic Movement through to 2028. The nine-year, five-Games partnership is designed to create a new standard for hosting that will be a win for host cities, a win for spectators and fans, and a win for athletes.

In line with the Olympic Agenda 2020, the IOC’s strategic roadmap for the future, and Airbnb’s mission to promote sustainable travel, the agreement will support the sustainability objectives of the Olympic Movement. These joint efforts will be in line with the UN Sustainable Development Goals to provide travel options that are economically empowering, socially inclusive and environmentally sustainable. The agreement includes accommodation provisions that will reduce costs for Olympic Games organizers and stakeholders, minimise the need for construction of new accommodation infrastructure for the Olympic Games period, and generate direct revenue for local hosts and communities. Working together with the International Paralympic Committee (IPC), Airbnb will work to increase accommodation that supports accessibility for people with disabilities or other accessibility needs.

Airbnb Co-founder, Joe Gebbia said: “Airbnb and the IOC have a strong track record in creating and accommodating the world’s greatest events. Our Olympic partnership will ensure that the Games are the most inclusive, accessible and sustainable yet, and leave a lasting positive legacy for athletes and host communities. Airbnb’s mission is to create a world where anyone can belong anywhere, and we are proud that the Olympic spirit will be carried by our community.”

IOC President Thomas Bach said: “This innovative partnership underpins our strategy to ensure that the efficient staging of the Olympic Games is sustainable and leaves a legacy for the host community. With Airbnb’s support, we will also develop new opportunities for athletes around the world to develop their own direct revenue streams through the promotion of physical activity and the Olympic values.” 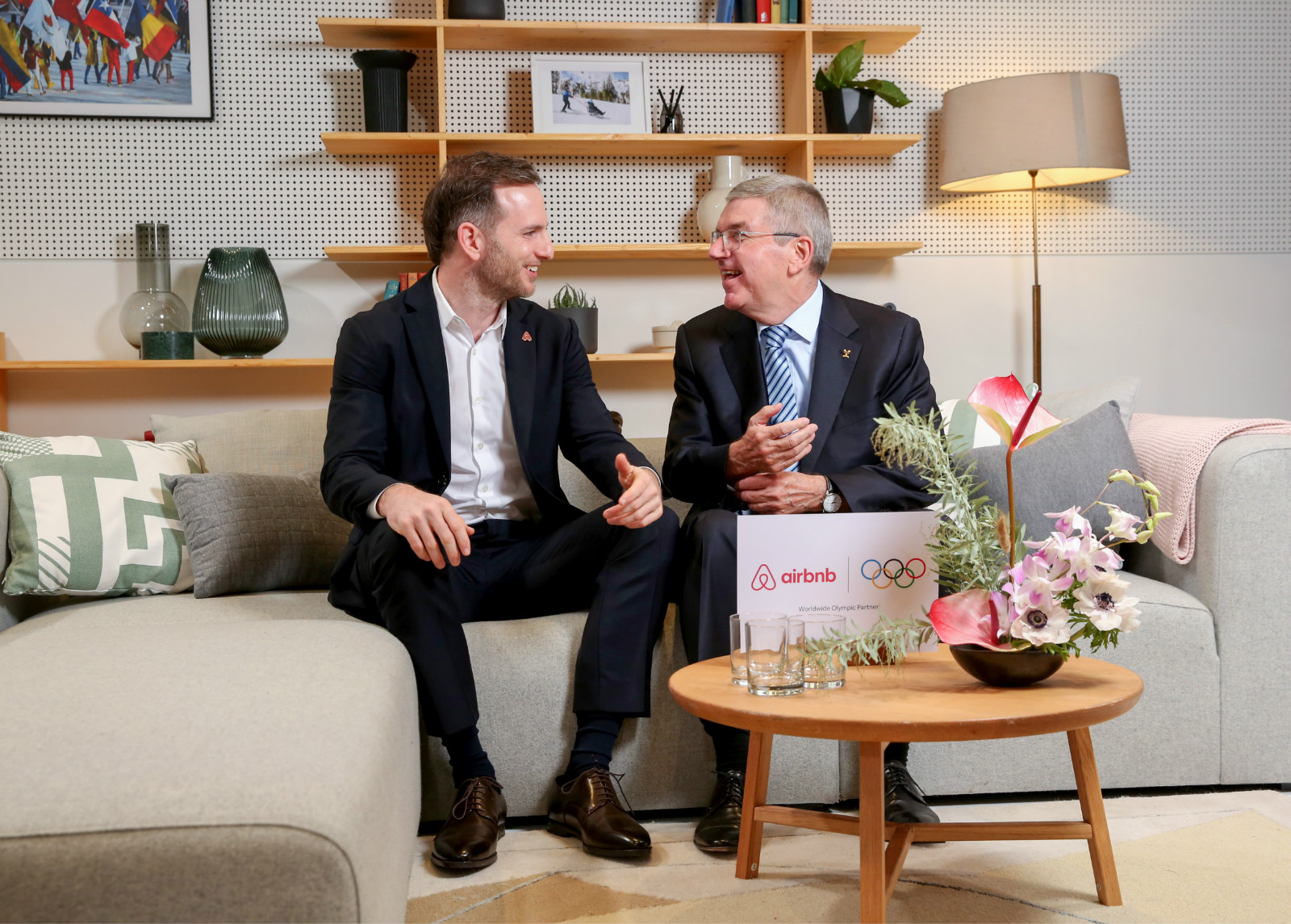 The partnership will generate hundreds of thousands of new hosts over nine years, giving community residents the opportunity to earn extra income by providing accommodation and local experiences to visiting fans, athletes and other members of the Olympic Movement. For visitors, the Airbnb community will offer a more local and authentic way to immerse themselves in the host cities and engage with local communities. For the cities themselves, the Airbnb community represents a more environmentally sustainable way of accommodating a surge in visitors.

The IOC and Airbnb will launch Airbnb Olympian Experiences to provide direct earning opportunities for athletes, underlining the IOC’s efforts to support athletes and put them at the heart of the Olympic Movement. To be launched in early 2020, this new category will bring Airbnb’s goal of providing economic empowerment through hosting to athletes across the globe– beyond the timeframe and geographical location of the Games. Promoting sport and physical activity, these experiences will include everything from the chance to train with an Olympian, to exploring a city with an elite athlete. In the coming months, Airbnb and the IOC, through the Athlete 365 platform, will provide support and training to athletes interested in becoming a host on the Airbnb Experiences platform.

In addition, the IOC will make at least USD 28 million worth of Airbnb accommodation available over the course of the partnership to athletes competing at the Olympic and Paralympic Games for competition and training related travel.

Kirsty Coventry, Chair of the IOC Athletes’ Commission, said: “On behalf of the Athlete’s Commission, I am delighted that our new global agreement with Airbnb will benefit the athletes directly. This includes direct revenue opportunities from sharing their passion for sport through new Airbnb Olympian Experiences, as well as direct support for their accommodation needs. We work to empower athletes around the world on and off the field of play, and this agreement is another example of how we are supporting and advocating for athletes throughout their career.”

Airbnb will also support the IOC in continuing to address the challenges faced by refugees around the world. The IOC has a long-standing commitment to refugees, including a cooperation with UNHCR since 1994, the creation of the IOC Refugee Olympic Team for the Olympic Games Rio 2016 and Tokyo 2020, and the creation of the Olympic Refuge Foundation in 2017. Airbnb has been supporting refugee initiatives since 2015 through its “Open Homes” Program, which connects generous hosts with those in need of temporary accommodation, including refugees. To date, more than 35,000 people have been housed in times of need. Over the course of the partnership, the IOC and Airbnb will establish further programs to provide long-term support to refugees.

Airbnb has previously supported the Olympic Games Rio 2016 and Olympic Winter Games PyeongChang 2018 as a domestic sponsor, as well as other major sporting events. A World Economic Forum study found that during the Rio 2016 Olympic Games, the added capacity provided through Airbnb’s platform provided the equivalent of 257 hotels for guests of the Games, saving the city in terms of materials use and carbon emissions, while also providing around USD 30 million in direct revenue for hosts and generating an estimated total economic activity of USD 100 million in three weeks. Similarly, during the Olympic and Paralympic Winter Games PyeongChang 2018, Airbnb hosts earned a collective USD 2.3 million in income providing accommodation to 15,000 guests who would have required 46 hotels. And most recently, in Japan, Airbnb hosts across the country welcomed more than 650,000 travellers during the Rugby World Cup period, earning more than USD 70 million in host income. 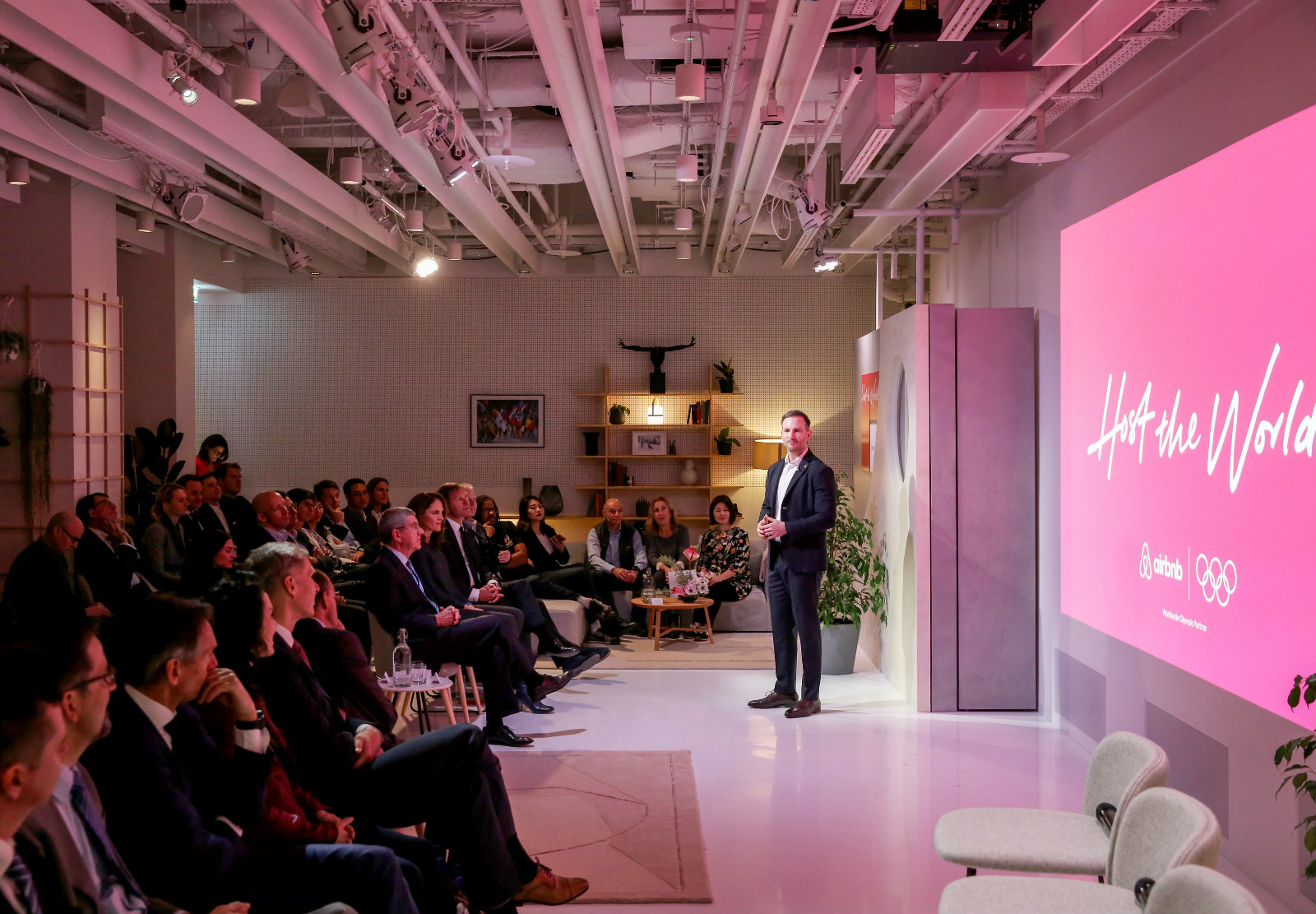 Airbnb becomes the Worldwide Olympic Partner in the exclusive category of “Unique Accommodation Products and Unique Experiences Services.” Worldwide Olympic Partners support every National Olympic Committee and their teams, and every Organiser of the Olympic Games, as well as provide support for athletes and the development of sport at all levels around the world. In addition, Partners promote the Olympic values and help create memorable experiences for fans worldwide.

Jiri Kejval, IOC Marketing Commission Chair, said: “Since it was founded in 2008, Airbnb has grown to become a global household name. This partnership supports the future sustainable operations of the Olympic Movement and demonstrates the ongoing appeal of the Olympic commercial programmes to the world’s leading brands.”

The agreement also includes marketing rights for the IPC and the Paralympic Games through the IOC-IPC long-term collaboration agreement, as well as for the Youth Olympic Games.